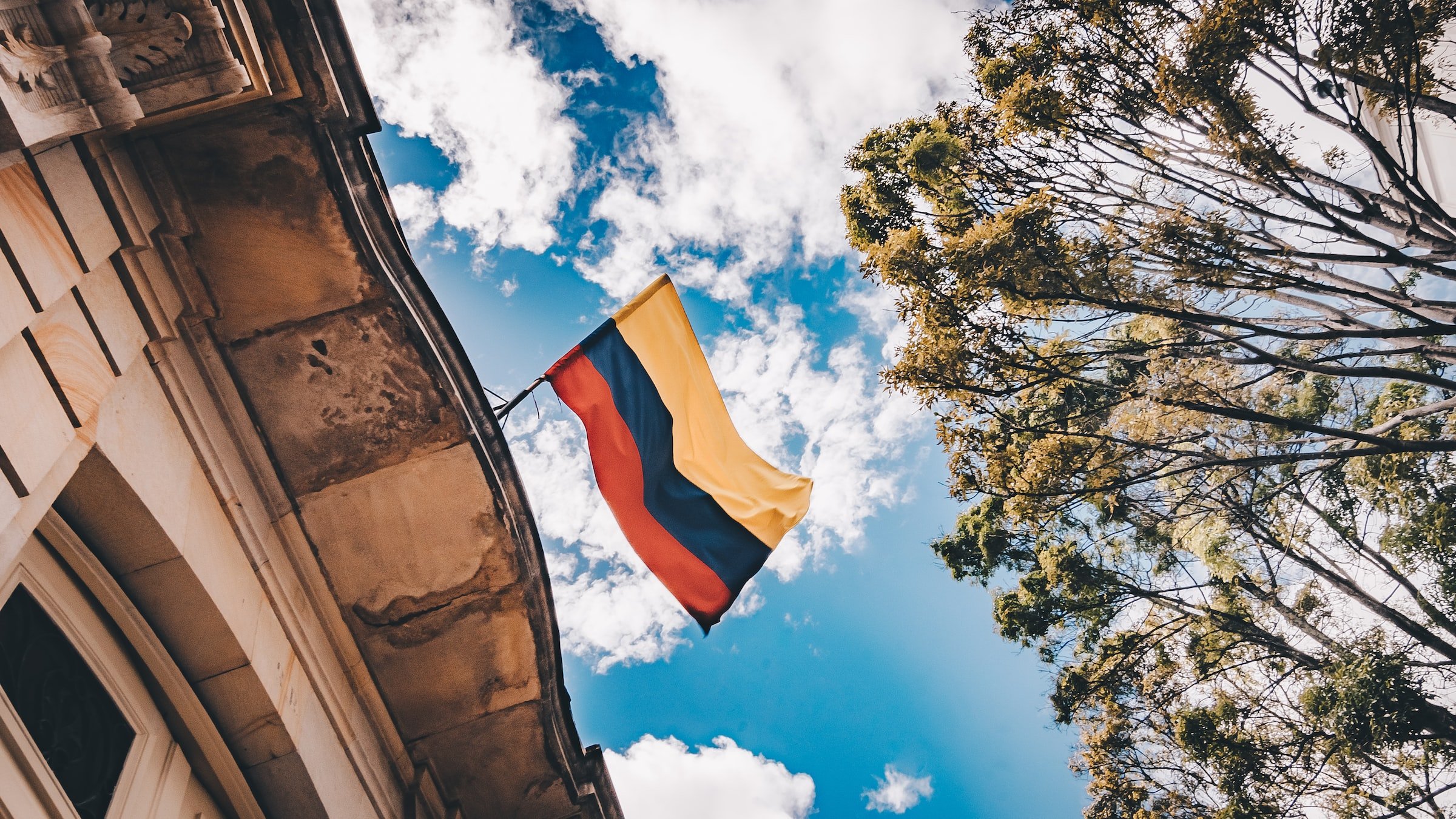 Colombia’s most recent presidential elections, held between last May and June, signaled a new era of politics as citizens voted in Colombia’s first leftist president. With 50.48% of the votes, former rebel and senator, Gustavo Petro, narrowly defeated real estate millionaire, Rodolfo Hernández who received 47.26% of the Colombian vote.

Considering that abstentionism in Colombia has averaged above 40% in every presidential election since 1990, it is clear that citizens are taking action to make their voices and concerns heard.

With Petro’s promises of reform — from improvements in health and agriculture to changes in the fight against drug cartels — his victory signals an underlying source of discontent that Colombians are seeking to rectify.

And while the result of this presidential election is a good indicator of current Colombian sentiment, it is critical to understand the deep-seated issues that citizens are most concerned about that have led to this turning of the tide.

Traditional methods of collecting public opinion — like surveys and polls — help uncover these issues as a snapshot in time. But for timely insights into citizens’ most current and ever-changing demands that can help inform action for early intervention and restitution, investing in real-time data solutions is the most promising and efficient way.

Polarization in Colombia has been extensive as discontent in various socio-economic areas has reached all-time highs. It is this dissatisfaction that led voters to choose a leftist leader against the long-governing right-leaning and centrist politicians that have traditionally held power in Colombia.

There are several issues that have worsened over the last few years — some exacerbated by the global pandemic — that have directly affected the quality of life for most Colombians.

On that list is the issue of income inequality. In 2018, after almost a decade of gradual decrease, income inequality increased with the top 10% of Colombia’s earners receiving almost 40% of the country’s income.

The pandemic further ignited an already burning issue: education. In March 2019, a study by the Ministry of Information Technology and Communications showed that 50% of Colombian households did not have access to the Internet. Thus, as the world transitioned to remote online learning during the height of quarantine and social distancing measures, the gap between socio-economic classes in Colombia widened even more.

And while the new president has promised to address some major issues, how can leaders strategically identify those that matter to citizens the most and take the appropriate action?

This is where Citibeats data comes in.

With the use of real-time data collected directly from Colombian citizens, Citibeats uncovered the people’s demands and identified their greatest needs.

The glaring problems Colombian citizens have been facing for several years, as indicated by stats and historical data, is just one piece of the puzzle. The key to government leaders’ ability to develop policies that will lead to positive long-term change is having the tools to monitor red flags that signal civic unrest and empower them to proactively implement solutions.

Citibeats is the tool that can help governments and policymakers accomplish this complicated task. By collecting unstructured data from digital platforms like social media, discussion forums, and blog posts, Citibeats brings to light social indicators that help guide actionable insights regarding the concerns that affect local citizens the most.

Unlike surveys and polls that leaders use to identify social sentiment, Citibeats generates data with a real-time dashboard that displays insights 90 days faster than these traditional methods and actually monitors changes as they unfold in the real world — whether that’s fluctuations among the Colombian populace regarding the economy, the educational system, or any other pressing issue that may arise at any given time.

During the six-month period from March through August 2022, Citibeats identified the top demands and concerns of Colombian citizens. 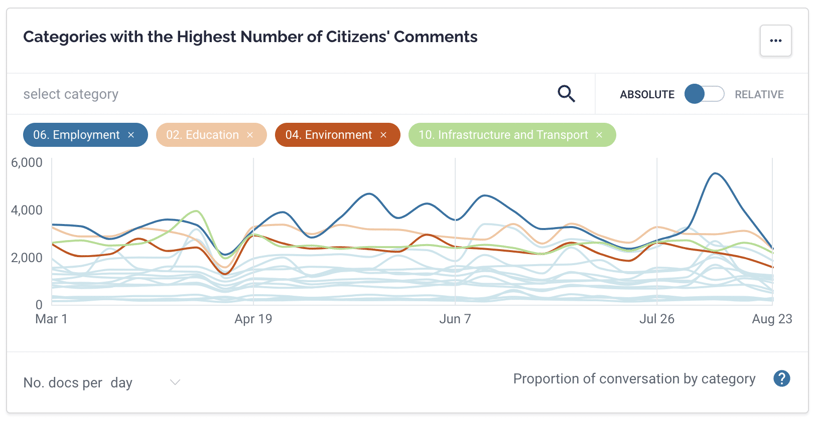 The area that generated Colombian citizens’ greatest fears and demands is employment. As previously stated with record-high unemployment rates, Colombians have much to be concerned about. Citizens fear that the tax reform project proposed by the new government will take a toll on small and medium-sized enterprises and raise unemployment even more.

In terms of education, the second most important issue among citizens, Colombians have pointed out the state of crisis that numerous educational institutions are facing as a result of the Covid-19 pandemic. Citizens demand structural reforms of the nation's education system for the rebuilding of quality education in addition to greater investment in school infrastructure as key actions to fight inequality.

The third most referenced topic is the environment. After years of lack of protection of Colombia’s natural resources, citizens responded enthusiastically to the government’s proposal for a transition to clean energy. But Colombians are demanding a solid strategy for a smooth transition accompanied by stronger sustainable agriculture, better waste management and sustainable transport.

Next, public concerns center around the category of infrastructure and transport. In an effort to meet citizens’ demands to boost social mobility and increase the quality of life in urban areas, strengthening the infrastructure of public transport is key. In addition, citizens' demands note the importance of generating conditions to support the development of sustainable mobility alternatives.

During the Citibeats data collection period, the platform also detected several comments regarding the people’s hope that the newly elected administration could be a turning point in the country’s development.

Along with the challenges Colombia must face, many opportunities have surfaced.

One of these is in the area of clean energies. As stated by a Colombian citizen in a tweet dated June 30, 2022:

The energy transition and the implementation of wind and solar projects is a great opportunity to link and benefit local communities and break with the vertical, excluding scheme of extractivism. A difficult task for the new government.

Another tweet from a local citizen shows hope for innovation in education:

Free education only is not enough, learning is the most important thing, and that it isn’t from the last century and obsolete is what’s really important, the ideas, thoughts that improve communities and societies, is what education should aim at, that is the transformation.

Other key opportunities and challenges identified were in the areas of peace agreements, sustainable mobility, and policies to support entrepreneurship and SMEs.

By understanding these insights into prevalent trends and public opinions, Colombia’s leaders are better equipped to respond to troublesome issues and mitigate further discontent among its citizens.

With early detection, leaders are empowered to be proactive in establishing policies that will deliver on the types of change that their people are demanding and safeguard against potential disruptions.

During this time of social turmoil, it is more crucial than ever that global leaders leverage real-time data that reflects the complex issues that citizens face and implement more inclusive policies that guide necessary changes. 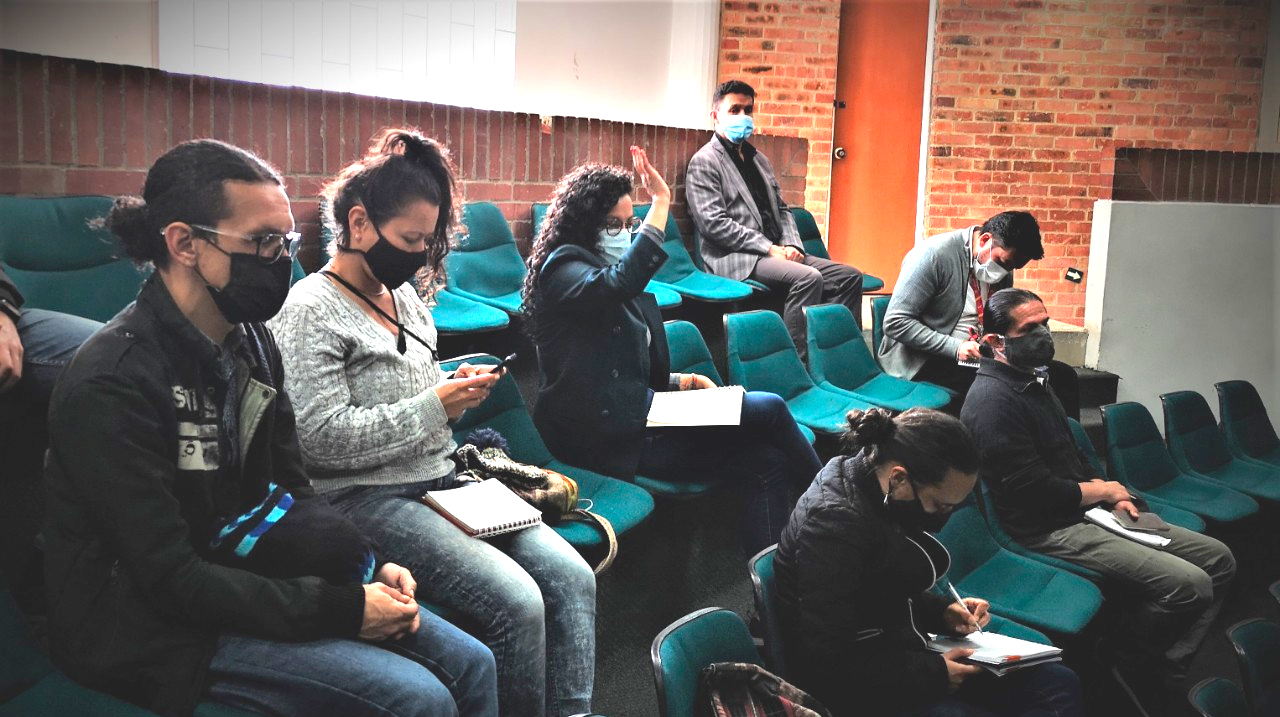 The management of the COVID-19 crisis reversed the country's socio-economic progress. One of the most affected groups has been the Colombian youth....